I’m looking forward to a blessed year, with new challenges, adventures and accomplishments. As far as my Bible study goes, I’m focusing on one of the Synoptic Gospels, the Book of Mark. This is one of the earliest manuscripts of the New Testament, and the first of the four gospels to be penned.

Mark was written approximately 30 years before the other two Synoptic Gospels, Matthew and Luke, and it is believed that these books used the Gospel of Mark as a model.

Each of the four gospels comes with its own audience, its own purpose. The whole Gospel of Mark is a call of faith and endurance through trials and suffering. It is all about the life and ministry of Jesus.

The Pace and Purpose of the Gospel of Mark

The Book of Mark is a book of action and reaction and we will pick up on this as we study it. There is no prologue and Mark jumps right into things. There comes a sense of urgency in this book, and it is very much in the present.

Mark, also called John Mark, was from a wealthy family and scholars postulate that the Last Supper was held in his home. He went on a missionary journey with Paul and Barnabas, who was his cousin. During this journey he had a change of heart and sailed for home, abandoning his partners. Because of this, Paul wanted nothing more to do with him, but Barnabas never gave up on him.

Barnabas Makes a Difference in the Life of Mark 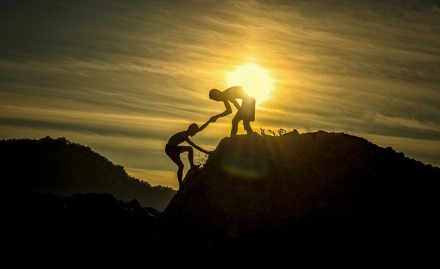 In the Book of Acts, we see that Barnabas was a likable, popular disciple, and was called “The Encourager.” So we have Mark as a living example of what a little encouragement can do. Barnabas was so certain that there was quality in this young man that he let a wedge come between himself and Paul. They had heated differences in bringing Mark on another expedition. Paul was against bringing Mark, and Barnabas fought for him.

Their differences were so sharp that Paul and Barnabas ended up parting. Barnabas took Mark and they went on their way while Paul took Silas. This parting was ultimately used for the good as there were now two traveling missionary groups reaching two different sects of people.

While we have no exact record of what happened on the journey of Barnabas and Mark, what they saw, every town and village they visited, whom they reached, the effect it on the people or the effect it had on the two of them, it must have had an effect. I say this because Mark grew strong in the Lord. He moved to Alexandria after the Crucifixion and started a church there and lived there until he died during the eighth year of Nero’s reign.

Finding Mark in Your Life

Further in the Book of Acts we know that Mark accompanied Paul, was amongst his inner circle of close companions, and became his scribe. Not only did Mark scribe for Paul, he scribed for Peter. In fact, scholars believe he scribed the Books I and II Peter, and that Peter dictated the Book of Mark. It is written with the personality and pace of Peter and matches Peter’s address in Acts 10.

Of all of the men and women, our brothers and sisters in faith, that have gone before us, in the millions, only a micro-percentage have ever written a book. And of those, only a micro-percentage have been inspired by the Living God and found their book added to the biblical canon. Mark was one of those, who, in his youth, was weak and flakey, perhaps too used to fine things in life. But Barnabas never gave up on him.

That is what I want to say to you at the start of the year. Maybe you’re giving up on someone who only needs a little encouragement or on someone who needs a good mentor and role model. Be that role model! Be a Barnabas! Or maybe you’re a Mark! Look for and yield to a Barnabas! Don’t give up on yourself! And don’t be a quitter! God isn’t in a hurry. He’s fine-crafting you for a bigger purpose. So just let Him!