Headlining the news in Spain over the past several days is the Madrid Ebola case. The missionary priest dies and his nursing assistant contracts the virus. I am so disgruntled over this story that I feel I must make some space on my blog to discuss the matter and vent. The news is alarming.

If it wasn’t bad enough that the missionary priest, Manuel Garcia Viejo, was brought here to be treated, he ended up dying anyway two weeks ago. One of the nuns working alongside another priest, who was the first Spaniard to contact Ebola, was Paciencia Melgar. She is an Ebola survivor and was kept in quarantine in Liberia after contracting the virus. After she was released she came to Spain.

Melgar has handed over a serum to the doctors that she received in Liberia to try and aid the dying nurse. Only a few days ago the name of the nurse was revealed. Teresa Romero lies fighting for her life in the Carlos III hospital in Madrid.

On September 30 Romero, after taking some time off after treating Viejo, the nurse felt ill herself but was told to go home, take some paracetamol and rest. She was strongly encouraged not to jump to any conclusions. What I am begging to know is why?

With something such as this Ebola virus, with the man she had been treating being sent to the grave from the virus, why not suspect she had contacted it? What would have been wrong with going to the extreme here and treating her as if she had Ebola?

I think the answer lies in the obvious fact that people just don’t know how to handle the virus. I mean, the professionals. That is apparently obvious to the locals in Madrid, too. A band of nurses has gathered outside Romero’s flat to ask for Ana Mato, the health minister, to step down. They realize that not just their health, but their lives are at stake. The hospitals do not have adequate facilities to treat Ebola, nor are they prepared. 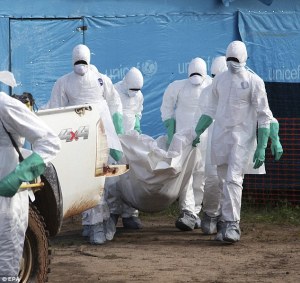 It is believed that Romero contacted the deadly virus by a part of her medical suit brushing her face as she took it off. Even following the protocol suggested by the medical staff with all of its steps including constant hand-washing, it didn’t stop the nurse from becoming ill.

As far down as Malaga province, the fears of medical professionals have been noted. “Doctors and nurses in Malaga have expressed their concern at the lack of training they have been given,” says the Sur in English newspaper in the October 10th-16th edition on the front page.

All of the media have page after page coverage of this story and others like it. Teresa Romero is the first person outside of Western Africa to catch the Ebola virus. It was October 6th that her fever grew to a point where doctors were concerned and they put her in isolation and finally began giving her special treatment. But it was perhaps too late.

By Friday she suffered respiratory failure.

Now the whole nation waits to see her outcome and holds their breath. Has anyone else contacted Ebola?

Another question that begs an answer, why did they put down her dog? Tweets went around the nation and hundreds of Spaniards signed a petition to keep the dog alive. But those at the top want to look proactive, like they are in control and know what needs to be done from spreading the virus. Since the virus could be on the pet’s fur, they put the dog down.

Could they not have done different? If they just would have treated Romero from the start as if she had Ebola, this blog might not have ever been penned. Will Mato resign? Will they step up the training for medical staff? What can one say when even the doctors admit they are concerned and unsure how to handle Ebola?